UPDATED FOR THE SEMESTER SYSTEM

CURRICULUM MAP FOR THE ASTRONOMY MINOR

An Astronomy Minor is an excellent way to learn more about Astronomy, whatever your major, and also will enhance your job prospects at places like JPL and NASA, where engineers work on interdisciplinary teams side-by-side with astronomers to design and launch satellites such as the Hubble Space Telescope, and the Kepler Planetary Search Mission.

Note that the Astronomy Minor is not available to students majoring in Physics; these students should instead pursue the Astrophysics Emphasis within the B.S. in Physics, General Degree Option.

The Astronomy Minor consists of 41 total units, including the 25 units in the courses listed below that go beyond freshman physics and prerequisite calculus courses that are taken by most science and engineering majors.

The core of the minor consists of three upper-division Astronomy and Astrophysics courses:

An introduction to astrophysical data collection and analysis from both ground-based and space-based telescopes. Concepts, techniques, skills and resources needed to plan, obtain, reduce, and interpret astronomical observations across the electromagnetic spectrum.

AST 4250/A - Astrophysics II: Galaxies and the Universe (4) (Spring only)
Physical processes governing the formation and evolution of galaxies and the universe as a whole. Topics include physical properties of the interstellar medium, black holes and other compact objects, galaxy dynamics, cosmological models, and applications of the general theory of relativity.

For more information on signing up for the Astronomy minor, contact Professor Matthew Povich. You can also get additional information on the Physics minor page.

A picture of me outside of my office on my first day at the U of A Chrystin is a physics major at Cal Poly Pomona. This upcoming year... 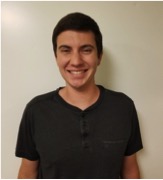 Tyler Garcia is a physics major who works as a learning assistant for the Physics department. He is currently working with Dr. Sadaghiani...