Combined Lecture/(L)ab or Lecture/(A)ctivity courses are listed together and must be taken as co-requisites. Optional recitation activity sections available for select courses are denoted by asterisks (e.g. A*). The semesters/terms in which particular courses are offered are indicated by the F, Sp, Su notations. If a course is not offered every year, then the alternating calendar years (even/odd) in which it will be offered are also given.

Survey of the universe including lifecycles of stars, supernovae and creation of the chemical elements, collapsed objects (white dwarfs, pulsars and black holes), the Milky Way and other galaxies, distances to stars and galaxies, expansion of the universe, and Big Bang cosmology. Emphasis on the basic principles of physics needed to interpret astronomical observations. Course fulfills GE area B1.

Cross Listed as: ANT 3050
Archaeoastronomy is a course synthesizing ancient and modern astronomical concepts. Themes of early science and empiricism emphasizing ancient cultures and their concepts of astronomy, cosmology, and time. Technological tools used by ancient societies to obtain and record astronomical data and knowledge will be studied. Examples will be drawn from ancient world cultures such as the Maya, the Aztec, Ancient Greece, Ancient China and others. An introduction to modern astronomical instrumentation and astrophysical insights will provide context for understanding the achievements and limitations of ancient scientists. Course fulfills GE synthesis area B5.

An introduction to astrophysical data collection and analysis from both ground-based and space-based telescopes. Concepts, techniques, skills and resources needed to plan, obtain, reduce, and interpret astronomical observations across the electromagnetic spectrum.

An examination of the origins of life in the universe based on astronomy, cosmology, biology, and planetary science. Topics may include the search for extraterrestrial intelligence (SETI), the history of life in our solar system, and the origins of the chemical elements through Big Bang nucleosynthesis and galactic recycling plants. Course fulfills GE synthesis area B5.

Physical processes governing the formation and evolution of galaxies and the universe as a whole. Topics include physical properties of the interstellar medium, black holes and other compact objects, galaxy dynamics, cosmological models, and applications of the general theory of relativity.

The basic principles that govern the behavior of matter and energy. These principles will be explored in both fundamental contexts (e.g. the nature of measurement, space, time) and applied contexts (e.g. energy issues, the scientific basis of modern electronic technology). Course fulfills GE area B1.

The fundamentals of acoustics and its application to music vibrations, wave, hearing, pure tones, complex tones, resonance, scales, consonance, and the physics of musical instruments. Course fulfills GE area B1.

Electric and magnetic forces and fields, DC and AC circuits, oscillations, electromagnetic waves, optics, and analogies between diffusion and electrostatics.

Individual or group investigation, research, studies, or surveys of selected problems. Proposals to be initiated by student(s) with guidance from faculty. Total credit limited to 6 units, with a maximum of 3 units per semester.

Group study of a selected well-defined topic or area not covered by a regularly offered course. Total credit limited to 6 units applicable to a degree, with a maximum of 2 sections per semester.

The physics needed to understand the technological and scientific dimensions of economic and political issues in today’s world and beyond. Topics will include energy, climate change, communications technologies and their applications, remote sensing, satellites, and medical technology. Course fulfills GE synthesis area B5. Minimal mathematical or scientific background is required.

Fundamentals of electronic circuits and solid state devices. Primarily analog electronics with some digital circuitry with an emphasis on scientific applications.

Addresses questions such as: How did Physics begin in the ancient Greek world? Why was the scientific tradition continued and developed in the Islamic world while Western Europe fell into a dark age? Why did the Scientific Revolution occur in the time and place that it did? How has the relationship of science and religion changed through time? How have the discoveries of modern Physics modified our worldview? What is it about Physics that makes it a unique way of learning about the world? Course fulfills GE synthesis B5.

Selected advanced mathematical techniques with applications to physics, with emphasis on modern examples drawn from the instructor’s expertise. Topics may include tensors, functions of a complex variable, special functions, and nonlinear differential equations.

Individual or group investigation, research, studies, or surveys of selected problems at advanced level. Proposals to be initiated by student(s) with guidance from faculty. Total credit limited to 6 units, with a maximum of 3 units per semester.

IFundamentals of quantum mechanics, including the Schroedinger equation with applications in one and three dimensions, spin, the simple harmonic oscillator and the hydrogen atom, the quantum mechanical postulates, algebraic methods, and matrix mechanics.

Cross Listed as: BIO 4100
A quantitative exploration of biological systems and the physical mechanisms underlying their operation. Topics may include membrane physics, the relationship between blood flow and metabolic scaling laws, diffusion and random walks, and a unified treatment of heat, fluid, solute, and electrical transport in biological systems.

On-the-job training and work experience in physics under the guidance of a faculty internship coordinator and on-site job supervisor. The internship is arranged by the student and may not be a continuation of an ongoing job or volunteer experience. A minimum of 4 hours per week (60 hours/semester) per unit credit. Total credit limited to up to 3 units. Student must be enrolled in PHY 4410 during the term in which work at the internship site is done. Hours worked in one term may not carry over into another. May be taken up to two times for a total credit of 4 units.

Selection and initiation of a project under faculty supervision. Projects typical of problems which graduates must solve in physics careers. Project progress is presented in an interim report at the end of the semester.

Execution, completion, and reporting of a project under faculty supervision. Projects typical of problems which graduates must solve in physics careers. Project results are presented in final written and oral/poster reports at the end of the semester.

Technical presentations by students on current developments in physics and astronomy, and discussions of journal articles and other primary sources at an appropriate level.

Group study at an advanced level of a selected well-defined topic or area not covered by a regularly offered course. Total credit limited to 6 units applicable to a degree, with a maximum of 2 sections per semester. 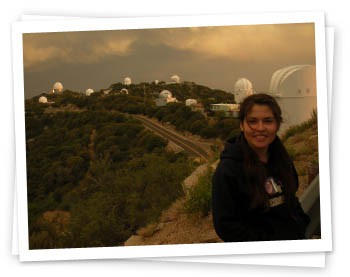 Gabriela Serna at Kitt Peak National Observatory on a very cloudy not-good-for-observing day. Gabriela is working on a physics major and... 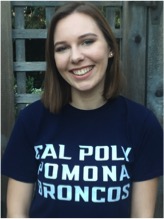 Sara Margala is a 4th year physics major who has been working in Dr. Abramzon’s lab since Spring 2017. Her current work...