Solid state physics is, in its broadest sense, quite simply the study of solids.  Solid State physicists study magnetic, electric, and structural properties as well as other aspects of solids.  In recent years, the field of solid state physics is often combined with the study of liquids under the broader heading, condensed matter physics.  Applications in condensed matter are quite numerous and the field employs a very high percentage of physicists.  In fact, the highest attendance (~9000 attendees) at any physics meeting is for the March meeting of the American Physical Society, a meeting principally for condensed matter physicists.

Professor Kurt Vandervoort has been involved in several aspects of solid state research.  He and student coworkers have studied the magnetic properties of high temperature superconductors.  These materials have been developed in the last thirty years and exhibit zero resistance to current flow at temperatures higher than the boiling point of nitrogen.  More recently, he has pursued investigations in the field of nanotechnology.  He uses scanning probe microscopes, instruments with atomic resolution that work by rastering a small probe across the surface of a sample.  His most recent research involving students uses one of these instruments, a scanning tunneling microscope, to produce extremely thin nanowires, that exhibit quantized conductance.  Instrumentation in Dr. Vandervoort's lab includes several commercial instruments, namely a Quesant atomic force microscope used mainly for other research (see Optics and Biophysics page), as well as a home-built scanning tunneling microscope and a home-built superconducting quantum interference device (SQUID) magnetometer.

Associate Professor Hector Mireles' current research endeavors at Cal Poly revolve around microscopy methods for studying solid matter and soft matter.  This includes birefringence materials as well as ferromagnetic surfaces.    In his research lab he has built a Magneto-Optic Kerr Microscope, which he and his students use to observe magnetic domains on special surfaces such as FeSi and new coatings of Stainless Steel.  Using polarized microscopy, he also measures the temperature-dependent birefringence of non-isotropic soft matter, such as liquid crystals and household polymers such as packaging tape.   In collaboration with research groups in Nebraska and Germany he is also studying the reversibility of magnetic heterostructures, by analyzing Alternating Gradient Magnetometer  data, in conjunction with the analysis methods known as  First Order Reversal Curve.

B. B. Lewis, K. G. Vandervoort, and R. D. Foster, Measurements of Quantized Conductance in Gallium as a Function of Temperature. (1999) Solid State Communications 109, 525 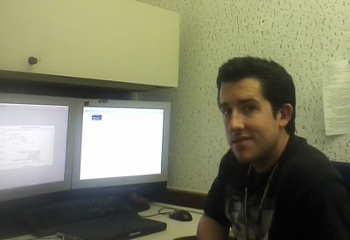 Checking results in my office. Matt is a physics major at California State University Los Angeles. Interested in physics(of course),... 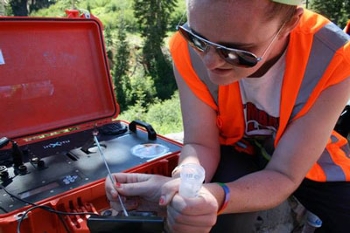 Rachel is a geology major, with an emphasis in Geophysics at Cal Poly Pomona. She spent the summer 2013 in the CAMPARE program at working...